Purpose: To investigate the correlation between the application of Er-YAG laser prior to any composite restoration and the occurrence of recurrent caries.

Methods: A review based on the literature search in PubMed was performed.

Results: based on the synthesis of the reviewed literature, different topics concerning the Er-YAG effects, characteristics, as well as dental tissues changes are discussed and recommendations are revisited.

Dental laser is the latest modern innovation of the 20th century. It offers an alternative to high speed drill, reducing patient’s discomfort and fear.

At present, Erbium lasers are the only hard tissue laser wavelengths available commercially. Their main chromophore is water, and they are well absorbed in carbonated hydroxyapatite, a component of natural tooth structure and bone (1).
These inherent absorption qualities allow erbium lasers to ablate tooth and bone. Indeed, they are unique in that they are the only lasers that can cut both hard and soft tissues. Two different wavelengths of Erbium lasers have been commercialized: Er,Cr:YSGG and Er:YAG, this review will focus on Er:YAG laser.

The use of the erbium yttrium aluminum garnet (Er:YAG) laser to remove carious tissue and prepare cavities started at the end of the 1980s in a study by Hibst and Keller. Later, this type of laser was approved by the US Food and Drug Administration in 1997 for use on hard tissues. Lately, many studies focused on investigating the efficiency of Er:YAG to remove carious lesion. (1,2,3)

Secondary caries (recurrent caries) is a primary carious lesion of tooth at the margin of an existing restoration; they usually occur years after composite or other kinds of restorations were performed.

This lesion has been widely considered as the most important and common reason for restoration replacement. It may occur in two parts: an outer lesion, formed on the surface of the tooth as a result of primary attack, and a wall lesion formed as a result of diffusion of bacteria, fluids or hydrogen ions between the restorations and the cavity walls (2).

Recurrent caries are induced by marginal microleakage of the restoration; so improved marginal integrity and adaptation of the resin-cavity interface are essential for the prevention of such caries (2, 4).

Do the changes in the surface texture of enamel and dentine induced by laser affect the microleakage of adhesive restorative material and result in preventing recurrent caries?

The Effect of Er:YAG on dental structures:

The mechanism of dental hard tissues removal by laser is called “thermo-mechanical process”, “photo thermal fragmentation” or “ablation”. The energy delivered by Er:YAG laser with a wavelength of 2.94 μm has one of the highest absorption in water, and a high affinity for hydroxyapatites. During irradiation, water heats and evaporates resulting in a high pressure of steam that causes a micro-explosion of dental tissues below its melting point (3).

Vaporization of water within mineral substrate causes the surrounding material to literally explode away in a popping sound which is more preferable to patients than the whirring of dental drill. Many studies have demonstrated that water cooling is required to reduce the increase in pulpal temperature and improve the ablation rate during cavity preparation; this is to avoid odontoblastic alterations and inflammatory response in the pulp chamber beneath the preparation (5).

Clinical studies, however, suggested that the application of the Er:YAG laser system was a more comfortable alternative or adjunctive method compared to conventional mechanical cavity preparation (7).

Erbium laser is slower in cutting through enamel than dentine. This is due to the fact that there is more water in dentine than enamel and more water in carious dentine as well; so the ablation of each of these tissues occurs at a varying rate. Erbium lasers are able to cut hard dental tissues with efficacy and depth that corresponds to the increasing power setting and use of water spray (8).

During cavity preparation, ablation of sound enamel by Er:YAG laser promotes cavities with rough enamel margins, irregular and rugged walls, a chalky surface, and a depth that depends on the energy density and pulse width (9).
Micromorphology of the Er:YAG laser-treated enamel depicts a retentive pattern similar to acid etched enamel while anatomical features of enamel rods are preserved. (10) (Fig1)
Consequently, preparation by Er:YAG laser at suitable output energy showed the better marginal integrity of resin composite restorations compared to a rotary cutting instrument.
Occlusal and cervical cavosurface angles were significantly different when the energy was increased: It is essential for the dentist to be aware of the alteration produced in the cavity form and cavosurface angles by the variation of energy in order to ensure selection of appropriate laser parameters for the desired cavity preparations. (11, 12)
Most of the studies available on microleakage and marginal adaptation used Er:YAG with high energies over 300 mJ. These energies induce subsurface damages into enamel. It is thus not surprising that many publications reported poor marginal adaptation with a high degree of microleakage, and that acid etching following Er:YAG with a low energy-used for finishing the enamel- gave much better results. (12, 10)
As soon as low energies were used for cavity preparation, microleakage of lased and bur treated cavities was not significantly different.
Some studies using dye penetration even presented less microleakage regarding lased cavities.
The problem is that the preparation with low energies requires a very long treatment time compromising the use of Er:YAG laser in the routine clinical setup. In comparison with classical bur treatment, it is necessary to smoothen cavity surfaces and margins, after efficient cavity preparation, with low energy settings; though when combined with acid etching as adequate finishing methods it has shown to improve marginal adaptation with less presence of microleakage (13, 14).

Fig1: Enamel surface etched with Er:YAG laser. Irregular areas on the surface due to tissue removal and intact area can be observed. (SEM×500-A and ×2000-B). The arrows shows untreated enamel surface within the irradiated area. (21)
At dentin level:

Dentin surfaces irradiated by Er:YAG laser were irregular, scaly, or flaky and dentinal tubules were opened without smear layer, cracked or melted; whereas protrusion of peritubular dentin was revealed due to its less amount of water compared with intertubular dentin.(Fig2)

Irregularities promoted by laser irradiation vary according to the energy density applied (6, 9). Also it is reported that these lasers can fulfill the requirement of minimal invasive dentistry due to the possibility of maximum conservation of sound tissue structure during caries removal and that of the surface decontamination of affected dentin (9).
Er-YAG laser is turned off when significant changes on fluorescence are detected during caries removal, established by a cut-off value indicating that all decayed tissue was removed (9, 15).

However, this technique hasn’t altered composition and microhardness of dentin tissue.
Three layers were observed in the sub-surface: a superficial less decalcified layer; an intermediate most decalcified layer, and a deep normal shade layer. Er:YAG laser irradiation affected acid resistance sub-surface dentin (8).
Bond strength of self-etching systems to dentin was not affected by any Er:YAG laser irradiation settings, but the etch and rinse systems showed the lowest bond strength on laser-irradiated dentin. The reasons for the decrease in bond strength to laser-irradiated dentin are related to the alteration of the acid resistance of dentin and the deficient diffusion of adhesive monomers within the denatured fibrils.
In other words, laser irradiation can form different organic and inorganic compounds which in term show different levels of acid solubility.
A well-defined hybrid layer was not noticed when Etch and rinse was bonded to laser irradiated dentin regardless of laser irradiation parameter used.
For self-etching systems, TEM figures showed that adhesive layers on irradiated dentin were consistently bonded to dentin without the presence of gaps or debonding areas. The adherence of the composite resin bonded to the Er:YAG laser-irradiated dentin using self-etching adhesive systems appeared equal or lower to those obtained for a bur-cutting dentin surface (16,17). 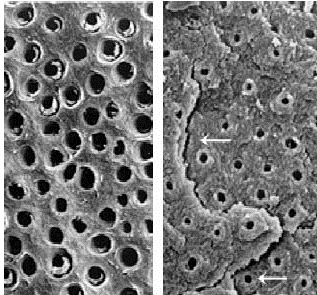 Neither odontoblastic alterations have been noticed nor inflammatory response in pulp chamber beneath the preparation observed. Histopathological studies in animals and humans have shown that pulpal tissues underlying deep cavity preparations realized with an erbium laser do not undergo pathological changes. Utilization of rats teeth have shown that fibroblast proliferation is observed sooner and more frequently in the specimens treated with the Er:YAG laser than those prepared with the high-speed drill.
Because the tissue is not vaporized completely but only disintegrated into fragments, radiant energy is converted efficiently into ablation that alters morphological structure of the tissue. No evidence of a melting process that might lead to considerable heat damage of the surrounding tissues (3, 5, 15).

Relevance of microleakage to secondary caries:

Microleakage refers to clinically undetectable leakage between cavity wall and filling. It has been also considered as a potential predictor of secondary caries and has caused serious concern to many researchers.
Absence of a seal at restoration margins permits entry of oral bacteria and fluids, which can result in postoperative sensitivity, adverse pulpal responses, and recurrent caries. There is a two-way interaction; the potential for leakage is influenced not only by the surface texture of the prepared tissues, but also by the composition and physical properties of restorative materials applied to it. Laser-induced changes in surface texture of enamel and dentine could potentially affect microleakage of adhesive restorative materials (9). 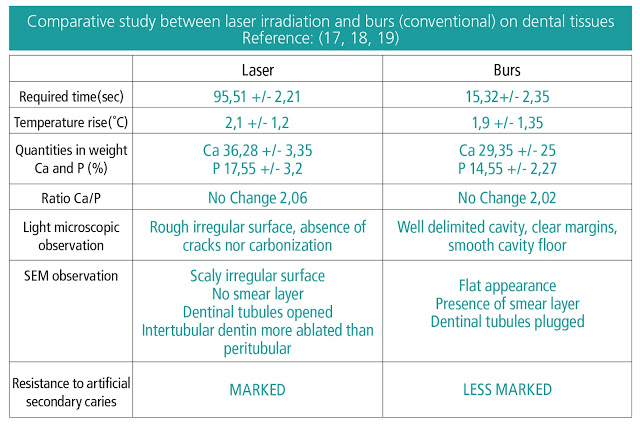 The use of laser irradiation in operative dentistry has several advantages such as a more conservative cavity design, a significant decrease of enamel solubility, which play a significant role in the prevention of recurrent caries.

Moreover, laser ablation provides more comfort to the patient due to the absence of vibration and a lower pain sensation.
On the other hand, the major drawback related to the use of Er:YAG laser in operative dentistry is the relatively long time needed for cavity preparation. Time required for a complete excavation is, in general, twice compared to that with rotary instruments. Therefore, they can be complementary to the rotary instruments, mainly on the dentin.
At dentin level, absence of smear layer is very often mentioned as an advantage of laser irradiation of tooth surfaces, in particular for bonding procedure but it has been reported that laser may change composition and conformation of the dentin’s organic matrix, which may impair adhesive penetration and facilitate collagen degradation particularly when it comes to etch and rinse systems since they are based on only micromechanical interaction with dentin. (6, 10)

Nanoleakage pattern of self-etching systems was not changed by irradiation and storage in water.

Irradiation with an Er:YAG laser with different parameters did not form a well-defined hybrid layer when etch-and-rinse adhesive was used, whereas for self-etching systems, TEM figures showed that adhesive layers were consistently bonded to irradiated dentin, without the presence of gaps or debonding areas (20).

High energies (over 300mJ) can induce sub-surface damages into enamel inducing poor marginal adaptation with a high degree of microleakage.
Low energies may require longer working time, but on the other hand, microleakage significantly decreased to become equal or even less then in bur treated cavities.
However it seems to be necessary, the same as after classical bur treatment, to smoothen the cavity surfaces and margins with acid etching in order to improve marginal adaptation (13).

Next step can be a specific laser optimized adhesive systems and restorative materials, to improve marginal integrity.

The dangers of DIY orthodontics

Simplified workflows without compromise to results

How I did it – building Yoursmile Clinic

Exposure to periods of low oxygen can result...

The straight and narrow – at last some...

An interview with Donna Campbell on orthodontic therapy-...

The straight and narrow – at last...