The first European guideline for the treatment of advanced (stage IV) periodontitis has just been published in the Journal of Clinical Periodontology (1), official publication of the European Federation of Periodontology (EFP). This groundbreaking S3-level clinical practice guideline (1) has been announced today during the press presentation of EuroPerio10, the world’s leading congress in periodontology and implant dentistry taking place until 18 June in Copenhagen, Denmark (2).

“Periodontitis has a huge impact on people’s lives, with bleeding gums, loose teeth, halitosis, and substantial, or even complete, tooth loss if left untreated,” said author Professor David Herrera of University Complutense of Madrid, Spain. “Those affected can experience difficulty eating and speaking clearly and some feel ashamed, frustrated and vulnerable. However, as today’s document shows, most advanced disease can be successfully treated and teeth maintained in the long-term.”

Periodontitis, a chronic form of gum disease, is caused by bacteria that accumulate on the teeth. Inflammation starts in the gums, then progressively destroys the ligament and bone supporting the teeth, causing the teeth to loosen and fall out. This guideline focuses on stage IV periodontitis, which is the most advanced stage. In addition to the inflammation and loose teeth in stage III, patients with advanced disease have some of the following: loss of five or more teeth due to periodontitis, teeth moving out of position, flaring (“buck”) teeth, and difficulty in chewing.

Clinical assessment of advanced “gum disease” includes five components. One, evaluate the extent of breakdown of structures supporting the teeth, aesthetics, and the ability to chew and speak. Two, establish the number of teeth already lost due to periodontitis. Three, determine which remaining teeth can be saved. Four, assess all factors in the mouth which could hinder or enable retention of teeth and/or placing dental implants, such spaces without teeth and the availability of bone. Five, ascertain the patient’s overall prognosis, including the probability of disease progression or recurrence, considering the possible presence of risk factors such as smoking and diabetes. 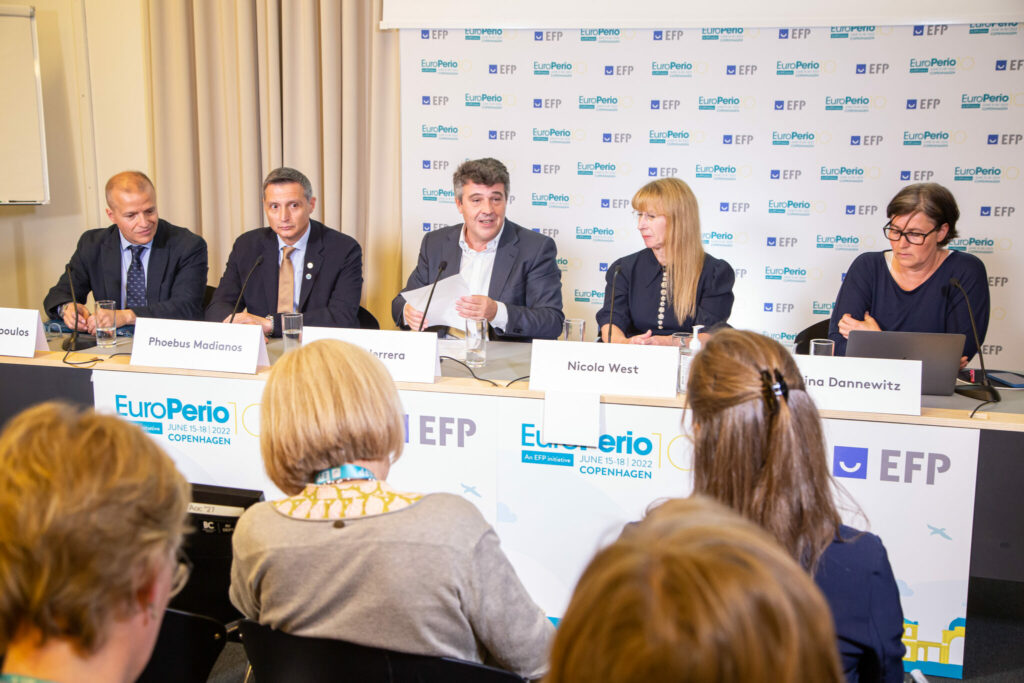 Professor Maurizio Tonetti of Shanghai Jiao Tong University School of Medicine, Shanghai, China, co-author of the guideline, explained: “This detailed diagnostic process is crucial as it enables us to design a multidisciplinary treatment plan based on what is technically and biologically feasible, cost-effective, and in line with the patient’s preferences and expectations.”

Treatment aims to control inflammation and prevent further damage of the supporting tissues of the teeth, and to restore tooth function. Therapy begins with the recommendations for stages I to III periodontitis which include good oral hygiene, not smoking, controlling diabetes, and professional cleaning of the teeth above and below the gum line to remove bacteria, as stated in the previous guideline published in 2020 (2). Additional treatments for stage IV disease can involve orthodontic therapy to straighten or move teeth, and construction of prostheses to replace missing teeth, either supported by teeth or by dental implants. Professor Herrera said: “Extracting teeth to place dental implants is not a reasonable option if teeth can be retained.”

He added: “Behavioural change is one of the pillars of therapy and the patient’s motivation and compliance are extremely important for success. This includes toothbrushing, cleaning between the teeth, sometimes using a mouth rinse to reduce inflammation, not smoking, and controlling blood sugar for those with diabetes. The benefits of periodontal therapy extend beyond the mouth to improved nutrition, quality of life, and systemic health, as, for example, better control of blood sugar in patients with diabetes due to the two-way relationship between diabetes and periodontitis.”

Professor Andreas Stavropoulos, EFP president, said: “This guideline for stage IV periodontitis complements that for stages I to III (3), meaning that for the first time in history we now have European recommendations for the interdisciplinary and evidence-based management of all stages of this disease. Application of the guideline is expected to improve the quality of periodontal treatment in Europe and worldwide. The EFP will be working with national periodontology societies to translate and adapt the guideline to the local context.”

The European Federation of Periodontology (EFP, ww.efp.org) is a non-profit organisation dedicated to promoting awareness of periodontal science and the importance of gum health. Its guiding vision is “periodontal health for a better life.”

Founded in 1991, the EFP is a federation of 37 national periodontal member societies that represents more than 16,000 periodontists, dentists, researchers, and oral-health professionals from Europe and around the world. It supports evidence-based science in periodontal and oral health, and it promotes events and campaigns aimed at both professionals and the public.

The EFP organises EuroPerio, the world’s leading congress in periodontology and implant dentistry, as well as other important professional and expert events such as Perio Master Clinic and Perio Workshop. The annual Gum Health Day on May 12, organised by the EFP and its member societies, brings key messages on gum health to millions of people across the world.

The EFP also organises workshops and outreach campaigns with its partners: projects to date have covered the relationship between periodontal disease and diabetes, cardiovascular disease, and caries, as well as women’s oral health during pregnancy.

The EFP’s Journal of Clinical Periodontology is the most authoritative scientific publication in this field. The federation also publishes JCP Digest, a monthly digest of research, and the Perio Insight magazine, which features experts’ views and debates.

The EFP’s work in education is also highly significant, notably its accreditation programme for postgraduate education in periodontology and implant dentistry.

The EFP has no professional or commercial agenda.

2) At EuroPerio10, the session “The multidisciplinary treatment of stage IV periodontitis” will take place on 16 June at 16.30 h at the Hall A of the Bella Center in Copenhagen. More details at https://europerio10.abstractserver.com/program/#/details/sessions/20

IDEC Returns After 4 Years for its Third...

Henry Schein One Partners With VideaHealth to Launch...

Making The Most Out of Your Dental Shadowing...

How to Manage Dental Anxiety

Do You Need to Adjust Your Dental...