Irregularly placed front teeth is one of the most frequently encountered chief complaint in day to day orthodontic practice. The etiology for which may be tooth size-arch length deﬁciency 1-4. This condition can be treated, either by reducing tooth size and/or by increasing arch width and/or arch depth 5-7. In other words, Orthodontists can gain space by expanding the arch antero-posteriorly or transversely along with other conventional means, depending on the treatment plan.

Non-extraction treatment protocols are better accepted by patients as well as clinicians. Among the techniques and mechanics with the potential to facilitate nonextraction treatment includes headgears, ﬁxed sagittal correctors, transverse expansion screws and self-ligating systems. Although each of these approaches necessitates an increase in arch length to facilitate alignment without extraction, it has been purported that passive self-ligating brackets can induce speciﬁc, uniquely stable arch dimensional changes when used with thermal-loy archwires 8.

Self-ligating brackets (SLB) are not new in orthodontics. They were introduced to the specialty nearly a century ago, with the Russell Lock 9 edgewise attachment being described in 1935. The Damon SL bracket 10 were introduced in 1996 and have been modiﬁed over the years.

In the past two decades, there has been an increase in the manufacturing and release of self-ligating brackets with active or passive ligation modes. The basic advantage of these brackets involves the elimination of certain utilities
or materials such as elastomeric modules along with the process or tools associated with their application. This is supposed to bring about several favorable features to the treatment including, the elimination of potential cross-contamination with elastic ligatures, consistently full engagement without the undesirable force relaxation of elastomeric modules, reduced risk for enamel decalciﬁcation from the elimination of the retentive site for plaque accumulation, reduced friction in sliding mechanics, and assumed low-magnitude forces resulting in fewer side effects 11.

The Objective was to retrospectively evaluate the intra-arch dimensional changes in moderate crowding cases, treated non-extraction with a passive self-ligating (Damon 3MX) appliance by assessing the pre treatment and post treatment digitized models and lateral cephalograms.

The study was formulated as a double blind study.

A total of 20 patients between the age group of 15 – 18 years who had undergone non extraction orthodontic treatment with the Damon 3MX (Ormco, San Diego, Calif) appliance were selected. Patients with a full complement of teeth up to erupted second permanent molars with moderate crowding in the maxillary and/or mandibular arch, with skeletal Class I jaw base relation treated with non-extraction treatment plan were included in the study. Orthodontically retreated cases, congenital absence of teeth, aberration in tooth size/shape were excluded.

Only those pretreatment and post treatment mod-els and lateral cephalograms were selected for scanning which met all the inclusion and exclusion criteria as well who were treated according to the passive self ligation philosophy as well with the standard wire sequencing. The following arch wire sequencing were used:

All the pre-treatment and post-treatment dental stone models of maxillary and mandibular arches were scanned using 3D digital scanner (Maestro 3D, Great lakes, USA) and converted into digital models which could be examined in all the 3 planes of space.

Inter-canine width: Measurements were made from the cusp tips of the right and left canine.

Inter-ﬁrst premolar width: Measurements were made between the buccal cusp tips of right and left ﬁrst premolars.

Inter ﬁrst molar width: Measurements were made between the mesio-buccal cusp tips of right and left ﬁrst molars.

First line is drawn connecting the central fossa of ﬁrst molars on the right and left sides. A second line was drawn perpendicular to the ﬁrst, bisecting the contact point between the central incisors.

U1 to SN plane angle: It is the inferior inside angle formed between the long axis of the upper incisor and Sella-nasion plane.

U1 to N-A (Angular): It is the angle formed by the intersection of the long axis of the upper central incisors and the line joining the nasion to point A.

L1 to Occlusal plane angle: It is the inferior inside angle formed by the intersection of the long axis of the lower incisor with the occlusal plane.

This angle is read as a positive or negative deviation from the right angle.

L1 to N-B (Angular): It is the angle formed by the intersection of the long axis of the lower central incisors and the line joining the nasion to point B.

The following results were obtained after the statistical analysis: 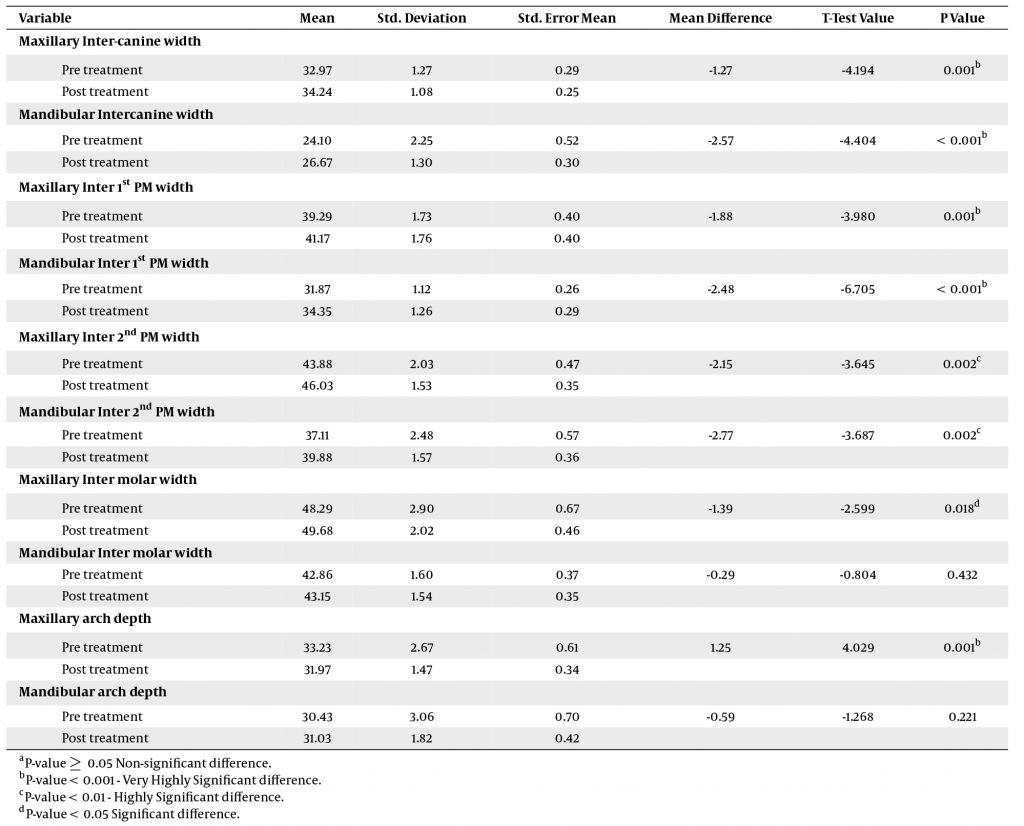 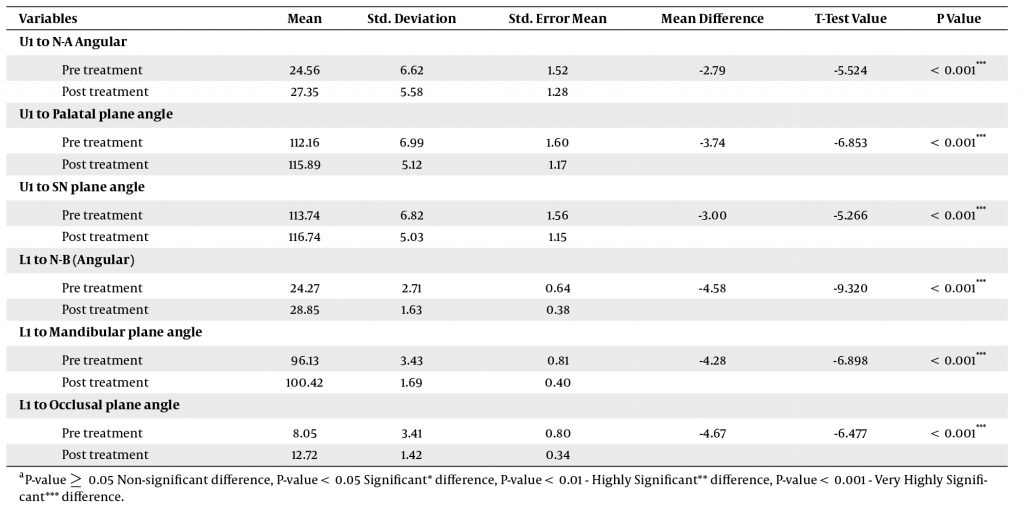 Passive self-ligation treatment philosophy 10 is based on providing optimum force levels for orthodontic tooth movement which should be just high enough to stimulate cellular activity without completely occluding the blood vessels in the PDL. Light continuous forces will produce continuous, frontal resorption and will not overpower the periodontal and orofacial musculature, and will prevent proclination of anteriors and causes more expansion in the transverse direction. Photoelastic model showed lower stress in periodontal tissue with self-ligating appliance as compared to conventional bracket system.15 Intra arch dimensional changes in both maxillary and mandibular arches in moderate crowding cases treated non-extraction with a passive self ligation appliance (Damon 3MX) were analyzed using digitized models and digital cephalograms.

This study showed an increase in maxillary inter-canine width, inter 1st premolar width, inter 2nd premolar width and inter molar arch width (Table 1). More transverse expansion was observed in the region of 1st and 2nd premolars as compared to the inter-canine and inter molar region. More expansion in the premolars region can be because of lip bumper effect which minimizes the pro-clination of anterior teeth and allow more expansion in posterior region. Previous study also showed majority of transverse changes in the premolar areas in both upper and lower arches, with less expansion in the canine and molar region 16, 17.

While assessing maxillary arch depth, the study showed (Table 1) a decrease in arch depth which can be because of more of transverse expansion, which created space and helped in unraveling of crowding in upper anteriors and less proclination. Overlapping because of crowding in anteriors was reduced with minimal proclination. Because of lateral expansion and derotation in posterior segment, some amount of mesial movement of molars could also have occurred, to improve molar relation.

The inclination of upper incisors was evaluated using U1 to N-A (Angular), U1 to palatal plane angle and U1 to SN plane angle (Table 2). Results showed an increase in proclination which was statistically signiﬁcant. Similar studies done in past also showed signiﬁcant amount of arch expansion in the maxillary arch 8.
In the mandibular arch also an increase in mandibular intercanine width, inter 1st premolar width, inter 2nd premolar width and inter molar arch width was observed (Table 1) similar to maxillary arch. Study also showed an increase in the mandibular arch depth (Table 1). Change in inclination of lower incisors was evaluated using L1 to N-B (Angular) values, L1 to mandibular plane angle and L1 to occlusal plane angle (Table 2).

Results showed increase in proclination which was statistically signiﬁcant. Insufficient interproximal reduction can be one of the cause of increased proclination of lower anteriors and increase in arch depth in mandibular arch.

Study showed increase in inter-canine width, inter 1st premolar width, inter 2nd premolar width and inter molar width in both maxillary and mandibular arches, with more expansion in premolar area. Arch depth was found to be decreased in upper arch it was found to be increased in lower arch however the passive self-ligation appliance can be used as a valuable tool because it minimizes the proclination which could have been produced during unravelling of crowding in both the arches without the space which have been gained with passive self ligation appliance by posterior expansion.

Present study had the limitations of small sample size of twenty patients and retrospective in nature. As retrospective studies are always subject to various types of bias because of the lack of randomization. Hence, the results obtained from the current study should be further strengthened using a larger sample size and preferably us-ing a prospective study model.

The Damon System: an interview with Dwight Damon

How did COVID-19 impact dentistry in Australia? –...

Evaluation of the release of nickel and titanium...

Adapting to patient finance and the rules of...