We are in the midst, or hopefully the tail end, of the worst pandemic most of us have experienced during our lifetimes. The common cold (and more severe respiratory diseases and disorders) are caused by certain respiratory viruses: Parainfluenza Viruses, Influenza Viruses, Human Rhinoviruses (HRV), Coronaviruses, Respiratory Syncytial Virus (RSV) and Human Enteroviruses (HEV).1 These often trigger more serious conditions such as chronic obstructive pulmonary disease (COPD) and asthma.2 Furthermore, the avian H5N1 virus can cause massive viral pneumonia, systemic disease and death.3 Severe infections affect millions of people worldwide, and cause 250,000-500,000 deaths annually.3 The total yearly economic impact has been estimated at $40 billion for non-influenza-related viral upper respiratory tract infections.4 There are currently no available vaccines or anti-viral medicines available for fighting viruses causing the common cold (except for RSV and influenza).5

The airway epithelial micro-environment, the primary site of viral infection and resulting pathology, is critically important to the outcome of influenza infection. Delivery of aerosolized therapeutics to this microenvironment can offer options in dampening an aggressive immune response in virulent influenza infections, and improving clinical outcomes.3 (Figs. 1 & 2) It would be logical to have products and/or devices that prevent viruses and bacteria from entering the human body via the nasal and oral passages and, ideally, to inactivate them (biocidal activity). 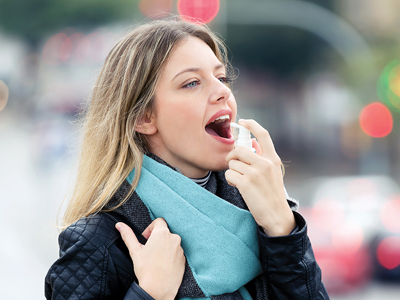 Flavobac™
Flavobac™ is a plant-based, patented combination of specific water soluble bioflavonoid molecules with known anti-microbial & anti-viral activity developed by Citrox Biosciences Ltd. (Kimbolton, United Kingdom).6 Flavobac™ is available in two formulations that have been used in medical devices.7 Chemically, they are C6-C3-C6 compounds in which the two C6 groups are substituted benzene rings, and the C3 is an aliphatic chain which contains a pyran ring.8 Flavonoids occur as O- or C-glycosides, or in a free state as aglycones with hydroxyl or methoxyl groups present on the aglycone.9 Bioflavonoids have previously been shown to have activity against viruses, bacteria, and fungi.10,11 The pharmacological effects of flavonoids are linked to their antioxidant and free-radical scavenging activity in addition to their ability to interact with enzymes, adenosine receptors and bio-membranes.12

The activity of flavonoids against Gram-positive bacteria (S aureus) has been demonstrated by compounds that contain hydroxyl groups in ring B.6 Activity against Gram-negative bacilli (Ps aeruginosa, E coli, P vulgaris and K pneumoniae) was demonstrated by flavones apigenin, vitexin, and saponarin.6 Some flavonoids have also been shown to possess anti-viral activity against influenza viruses HSV-1, HSV-2 and the rotavirus.6 The flavonoid activity versus the HIV virus is related to either a direct effect on the virus or on the HIV-1 reverse transcriptase or HIV-1 integrase enzymes that regulate replication.6

There are several available medical device products which are designed to act as a barrier to possibly prevent the onset of colds and influenza by providing a physical barrier to the adhesion of microorganisms and viruses to nasal and throat mucosal membranes. Coldzyme® Mouth Spray is an oral spray for common colds that forms an enzyme barrier on the mucous membrane of the oropharynx throat to help prevent the viruses from infecting cells.13 Another product is the Vicks First Defense Nasal Spray, a medical device that claims to help in reducing the onset of colds and reducing their symptoms, severity, and duration.14 However, neither of these products contain natural plant-based bioflavonoids (Flavobac™).

Efficacy of Flavobac™
Several studies have demonstrated the use of bioflavonoids as “natural” antimicrobial compounds.15-17 A 2011 paper demonstrated the use of Citrox Biosciences Ltd (Flavobac™) bioflavonoid preparations as effective antimicrobial agents against oral microorganisms, including fourteen bacterial species and six candida species.7 An efficacy study on the use of 0.25% preparation added to two contact lens solutions (ReNu® MPS and Opti-Free RepleniSH) demonstrated that it was an effective additive to these solutions by enhancing sanitizing ability against a range of microorganisms including bacteria, fungi, yeast and Acanthamoeba trophozoites.18

Retroscreen Laboratories and Biobest Laboratories are both established, independent virology laboratories in the United Kingdom that have independently demonstrated that Citrox Biosciences Ltd (Flavobac™) bioflavonoid preparations are efficacious in the inactivation of two different subtypes of Influenza A: H5N1 (Bird Flu) and H1N1 (Swine Flu). This was observed as a significant reduction of viral titre observed in the two separate trials performed. Another study was carried out by Retroscreen Virology Ltd, Barts & The London Queen Mary’s School of Medicine and Dentistry, London in 2004. This study evaluated the viricidal activity of a flavonoid compound (Flavobac™ BC) against Urbani SARS virus, Influenza A virus, Human Rhinovirus and HIV. The results demonstrated significant viricidal activity against all the viruses at all concentrations and time-points. In a study conducted at the Department of Infection Immunity & Inflammation, University of Leicester, pneumococcal cultures recovered from mice nasopharyngeal tissue and treated with Citrox Biosciences Ltd (Flavobac™) bioflavonoid preparations were also killed, demonstrating the bactericidal effectiveness on pneumococci grown in vitro and in vivo. Abbott Analytical Laboratories Ltd, UK, conducted independent studies with Citrox Biosciences Ltd bioflavonoid preparations in hand rubs (sanitizers); the results demonstrated a log5 reduction of both gram positive and gram-negative bacteria (performing as well as 70% Propanol in EN 1500 hand rub tests). There also appears to be some residual activity of up to 3 hours (post-activity) showing a tenfold reduction in surviving bacterial numbers when compared with Propanol. Based on these tests, it can be concluded that Citrox Biosciences Ltd (Flavobac™) bioflavonoid preparations are effective biocides, and, assuming they are not diluted beyond 0.5% v/v final concentration, provide antimicrobial activity comparable to other products on the market. Based on the total bactericidal effectiveness demonstrated in the above experiments, Citrox Biosciences Ltd (Flavobac™) bioflavonoid preparations has been shown to be effective for clinical applications. 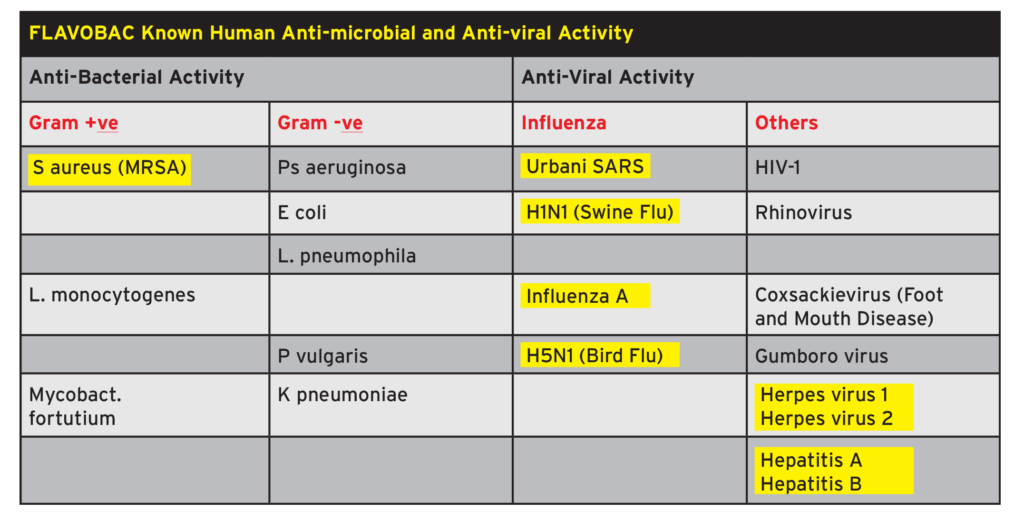 Cold & Flu Guard Nasal/Oral Spray
Cold & Flu Guard is a Class I Medical Device. Its a nasal/oral spray designed to protect the mouth and nose by preventing the ingress of viruses and bacteria and to enhance/support the body’s natural response to viral and bacterial attacks. The active ingredients of this device are hyaluronic acid, Citrox Biosciences Ltd (Flavobac™) bioflavonoid preparations and water. It is applied in 1-2 sprays per each nostril and in the mouth, repeated 2-3 times per day and continued for at least 2 days after symptoms subside. The airway epithelium is the target and the primary site of infections and resulting pathology. The delivery of aerosolized spray of Cold & Flu Guard constituents to the epithelium of the oropharynx may reduce the severity of aggressive virulent influenza infections and improve clinical outcomes. Cold & Flu Guard coats the back of the nose and throat, traps and neutralises the viruses, and helps the body to naturally remove the cold and flu viruses before they develop into a full-blown cold or flu. (Table 1) Cold & Flu Guard is CE marked and has been sold available in the UK and Europe since 2018 through Amazon, Walmart and online pharmacies.

The high molecular weight Hyaluronic Acid (HA) in the formulation of Cold & Flu Guard is a sticky substance that is naturally present in the human body, and acts as a barrier to trap incoming pathogens. HA forms a film which help to keep the Flavobac™ on the surface of the mucosa. It is widely available and used for the treatment of osteoarthritis, for the healing of wounds, burns, skin ulcers, and as a moisturizer. In addition to its anti-pathogenic effect, the Flavobac™ in the formulation provides the body with a large dose of antioxidants and has low toxicity (it is well-tolerated).

Conclusion
Citrox Biosciences Ltd’s Flavobac™ is a plant-derived bioflavonoid complex that presents anti-pathogenic activity and clinical safety, promising clinical value to the medical and dental fields. In Europe, it is already available as an oral and nasal barrier to help prevent the onset of cold and flu. Work is currently underway to develop mouth rinses and toothpaste containing Flavobac™ which may serve as valuable adjuncts for improving oral hygiene and protect healthcare professionals. Research has shown that a combination of chlorhexidine (CHX) and bioflavonoid complex was more effective at inhibiting bacteria, compared to using either of these ingredients alone.17

Dr. Zeeshan Sheikh is a clinician scientist and has been trained as a dental surgeon & a biomaterials expert from Baqai University, Queen Mary University of London, McGill University, University of Toronto and Mt. Sinai Hospital. Dr. Sheikh has more than 8 years of clinical experience in private and hospital-based dentistry. He has published more than 60+ original research articles, reviews, clinical case reports and book chapters. He is currently a Surgical Resident at Dalhousie University in the Periodontics and Implant Surgery program.

the future of dentistry – Dentistry Online

The management of patients and their first appointments – Dentistry Online

What You Need to Know About the Controversial...

Brushing and beyond: Taking care of your oral...

About us | Oral Health Foundation

Drugs, alcohol and your oral health

The time has come for a ‘pudding...

A Letter from dentalcorp – Oral Health...