Approaches to the management of dental caries have changed dramatically in the past century, shifting from the traditional, mostly restorative treatment approach to a preventive and minimally invasive one.1 The mindset of “extension for prevention” has changed to “prevention of extension.”2 This article will describe a method of nonsurgical management of early, non-cavitated carious lesions.

A white spot lesion (WSL) is defined as an enamel surface and subsurface demineralization without cavitation and represents the first clinical observation of the progression of dental caries.3 In 1908, G.V. Black described enamel WSLs as “occasional white or ashy gray spots that were small and covered with the ordinary glazed surface of the enamel, so that an exploring tine will glide over them the same as over the perfect enamel.”4 Further work on this topic confirmed that the surface of these early enamel lesions remained relatively unaltered, displaying an intact outer layer with a porous demineralized area underneath the external (pseudo) intact layer known as the body of the lesion and that the body of the lesion contained 25% to 50% porosities.4 There are predisposing risk factors, such as poor oral hygiene, altered salivary flow, and the presence or absence of fluoridation that make a tooth more susceptible to WSLs.3 More importantly, orthodontic treatment is one of the leading causes of WSLs today. In the literature, there is a WSL incidence equal to 46% to 73% in patients treated with fixed orthodontic therapy.3

A conventional technique for the treatment of WSLs is remineralization with topical fluorides or casein phosphopeptide–amorphous calcium phosphate.5 Remineralization can be an effective treatment, but it requires time and patient compliance,6 and the aesthetic masking effect is not always ideal.7 Resin infiltration was a technique developed in the 1970s; however, its clinical use did not become popular until the late 2000s.8 In 2009, a new resin infiltrate named ICON was introduced by DMG.5 This technique was proposed to treat incipient carious lesions and allowed the masking of white spots by alteration of the optic properties of the lesion via infiltrating the micro spaces in the body of the lesion up to a depth of 450 µm.5 Paris, Schwendicke, et al9 have shown that the technique is successful in masking of WSLs in vitro and that polishing of the lesions leads to increased color stability. A randomized clinical trial by Paris, Hopfenmuller, and Meyer-Lueckel10 over 18 months between ICON as test group and control demonstrated a 7% progression of carious lesions in the test group vs a 37% progression in the control group, effectively establishing its efficacy in arresting the carious process as well.

The principle of resin infiltration is based on the penetration of low-viscosity resin (triethylene glycol dimethacrylate) into the subsurface pores to form hybrid enamel. This hybrid enamel, as described in an ultramorphological analysis by Perdigão,4 stops demineralization, stabilizes the caries lesion, and acts as a superficial mechanical barrier to inhibit outer bacterial colonization and trap bacteria in the lesion.11 Infiltration of a low-viscosity resin into the intercrystalline spaces of hypocalcified or demineralized enamel alters the refractive index (RI) of the porous enamel, which is either filled with air (RI = 1.00) or water (RI = 1.33). The infiltrated resinous material has an RI (1.52) closer to that of hydroxyapatite (1.62). Therefore, when infiltrated, the optical characteristics of the affected enamel are altered, and it camouflages the lesion to look like the surrounding sound enamel.8

Although the aesthetic benefits of resin infiltration are often the reason patients seek this treatment, resin infiltration was initially developed to treat enamel caries. Several clinical trials have studied the caries-inhibition effect. A randomized, controlled trial by Meyer-Luekel et al12 showed proximal lesion progression of 5% in the test group and 31% in the control group after 18 months. A long-term study by Paris, Bitter, et al13 (7 years) reported caries progression in 9% of the lesions treated with resin infiltration vs a 45% incidence of progression in the control lesions. Similarly, a 3-year randomized clinical trial by Peters et al14 reported that the prevented fraction was 86% for infiltration vs 52% for control. It is important to note that these studies were randomized split-mouth, placebo-controlled clinical trials, and they all focused on lesions in inner enamel and outer dentin.

The clinical stability of the aesthetic outcome of resin infiltration seems promising. Clinical studies carried out over 6 months, 1 year, and 2 years15-17 all report that the color changes obtained after resin infiltration stayed stable in the oral cavity over the periods reported. However, several laboratory studies have reported that teeth treated with resin infiltration will accumulate more stains when soaked in solutions of coffee or wine for extended periods of time (around one week).18-20 Patients may be informed that these types of staining beverages may lessen the aesthetic benefit of the treatment over time. One study found that surface polishing the stain improved the color,19 and therefore, polishing the surface of the treated tooth may be an option for a patient with staining.

ICON is currently the only resin infiltration system commercially available. The kit consists of an etchant (ICON-Etch), an ethanol-based agent (ICON-Dry), and an unfilled resin (ICON-Infiltrant). The initial steps consist of oral prophylaxis followed by etching. The etchant is then washed and dried, and the lesion is treated with a desiccating agent (ICON-Dry) to get rid of any excess moisture. The final step is infiltrating the lesion with the resin and curing.

A 16-year-old patient presented to the University of Alabama at Birmingham Faculty Practice for treatment of WSLs on his anterior teeth following orthodontic treatment. The patient had received orthodontic debonding 4 months previously. His previous dental provider had attempted to remineralize the lesions using a calcium phosphate paste; however, the aesthetic improvements were minimal. His previous provider then recommended treatment with bonded composite restorations; however, the patient and his parents desired a more conservative option.

Upon examination, the patient had several WSLs on teeth Nos. 5 through 12 and a small cavitated lesion on tooth No. 10. The process of resin infiltration was explained to the patient and his parents. They were informed that resin infiltration is a technique in which a “cleaning gel” is applied to the tooth to remove the outer 50 µm of enamel (which is similar to the thickness of a human hair). They were informed that the process may need to be repeated several times in order to treat deeper lesions. A “liquid resin” would then be soaked into the tooth and cured with a blue curing light. At this point, it is also important to warn patients that a perfect aesthetic outcome cannot be guaranteed with resin infiltration alone. For some lesions, the white spots may improve but remain visible. Finally, the process of placing the rubber dam was explained to the patient. The patient should be informed that some of the cleaning gel may leak slightly through the rubber dam and cause temporary bleaching of the patient’s soft tissue. 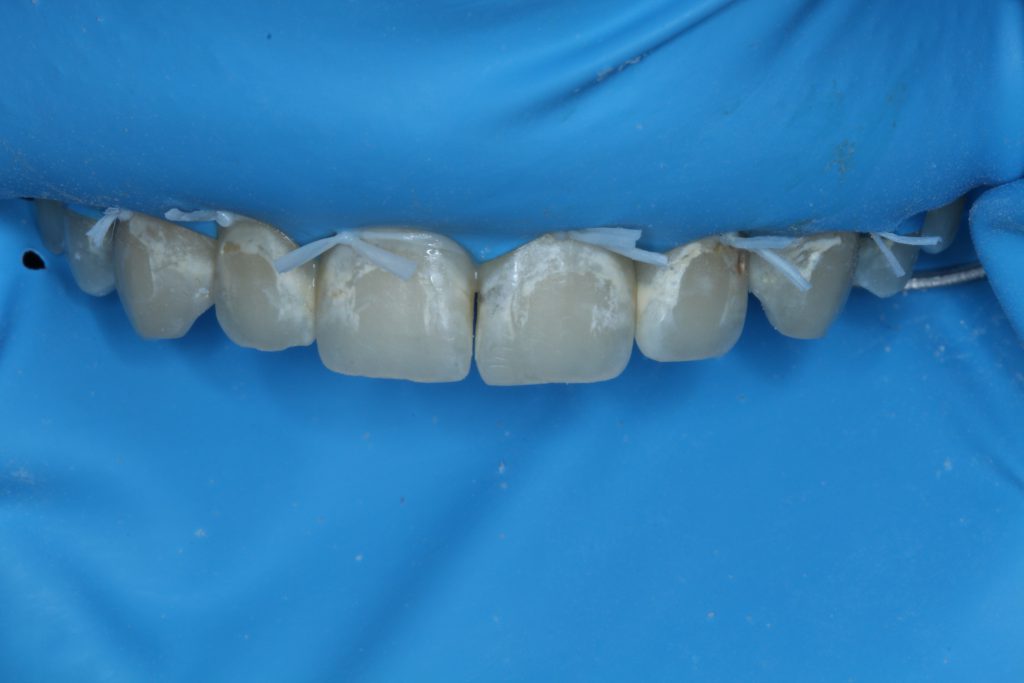 The teeth were then etched for 2 minutes with the ICON-Etch gel, which is composed of 15% hydrochloric acid.

Following the first application of the etchant, the teeth were rinsed, dried, and observed.

A second round of etching was then performed (Figure 2). 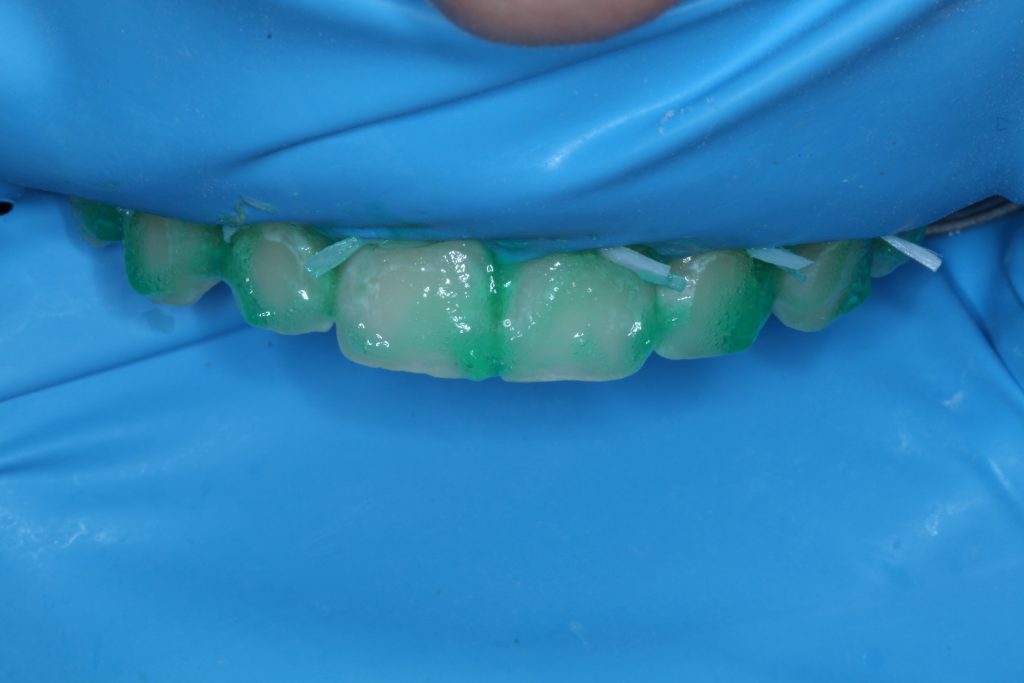 Following the second round of etching, ICON-Dry solution (composed of ethanol) was applied to the etched tooth, and visual changes in the tooth were observed. Visual improvement in the appearance of the WSLs observed with ICON-Dry can predict the improvements that will occur when the lesion is infiltrated. Therefore, this step is used to determine if the lesion is ready for infiltration or if it will require additional etching (Figure 3). Since the lesion required further visual improvement, a third round of etching was performed. 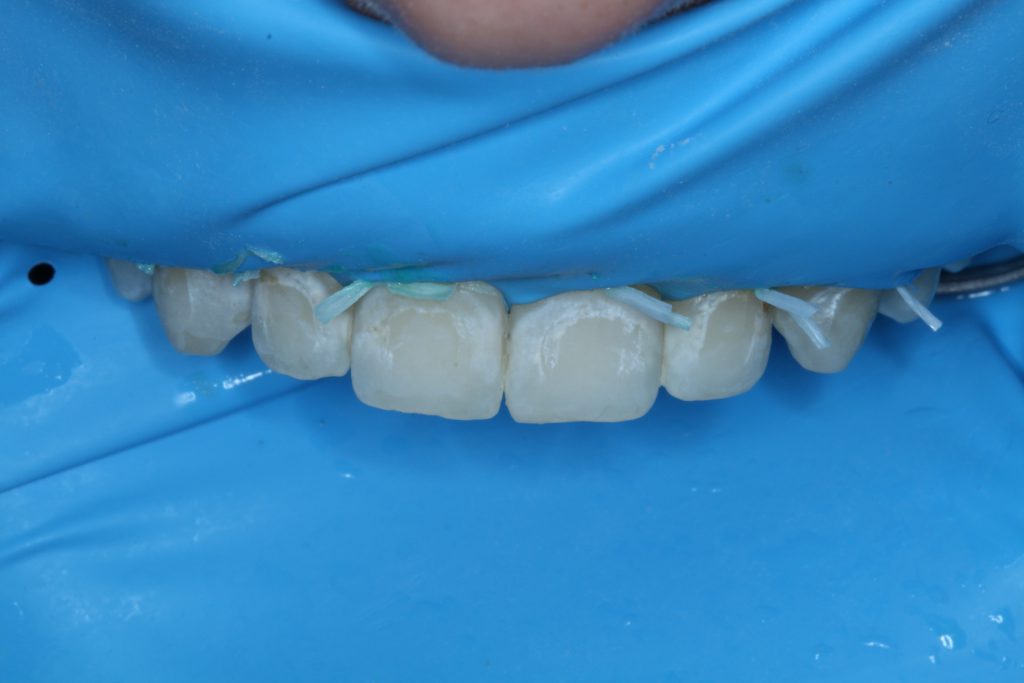 Figure 3. The ICON-Dry (DMG) alcohol solution was applied to check for visual improvement.

The ICON-Dry was applied following the third round of etching, and the lesions were almost completely camouflaged (Figure 4). The operator should be aware that the lesions will appear more frosty white following etching than they did originally. The use of ICON-Dry or the resin infiltrant will drastically improve the color. 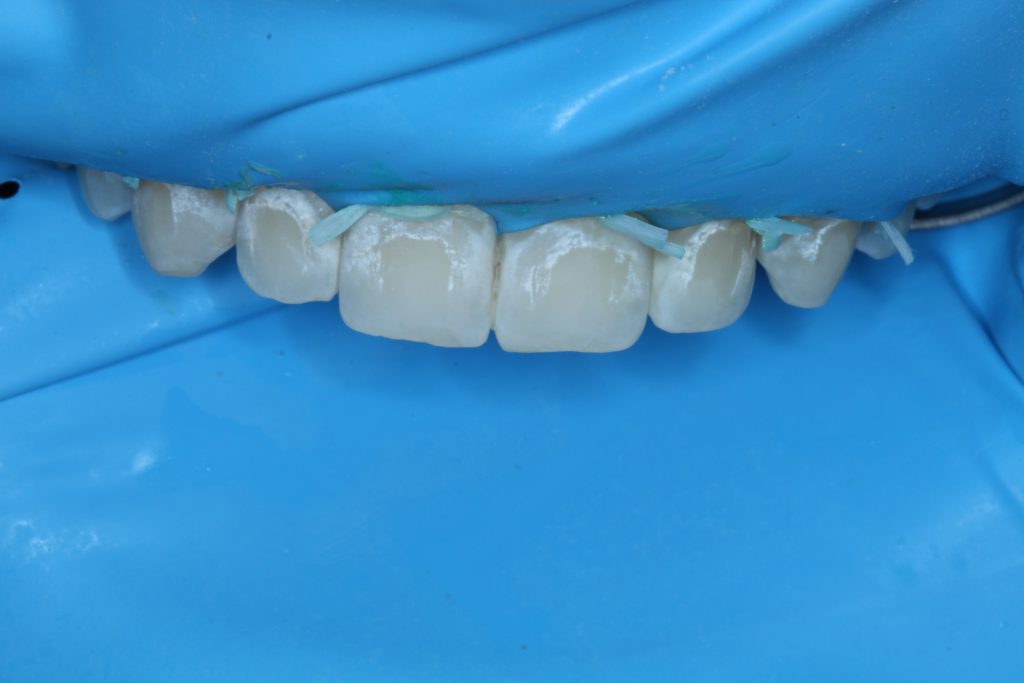 Figure 4. The third round of etching, and again, ICON-Dry was applied. 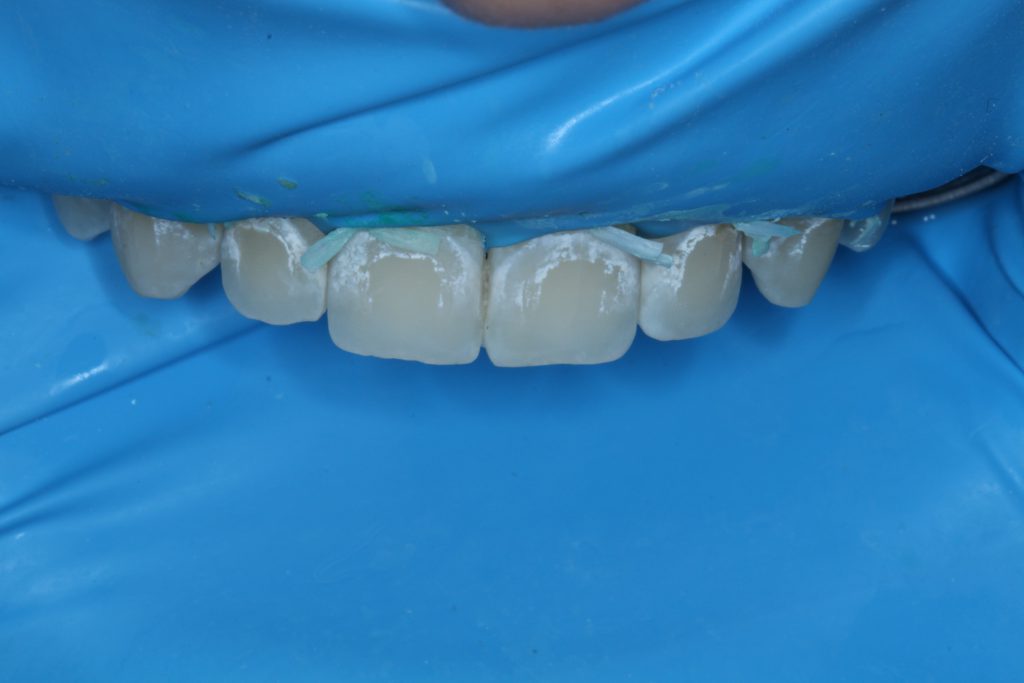 Figure 5. ICON-Dry sits for 30 seconds and is thoroughly dried, and the resin infiltrant is applied for 3 minutes.

At the conclusion of treatment, the patient and his parents were pleased with the aesthetic outcome. Although resin infiltration is not a treatment recommended for cavitation lesions, the cavitation on tooth No. 10 felt hard to the touch with the explorer following treatment (Figure 6). The decision was made to monitor the lesion without surgical intervention. 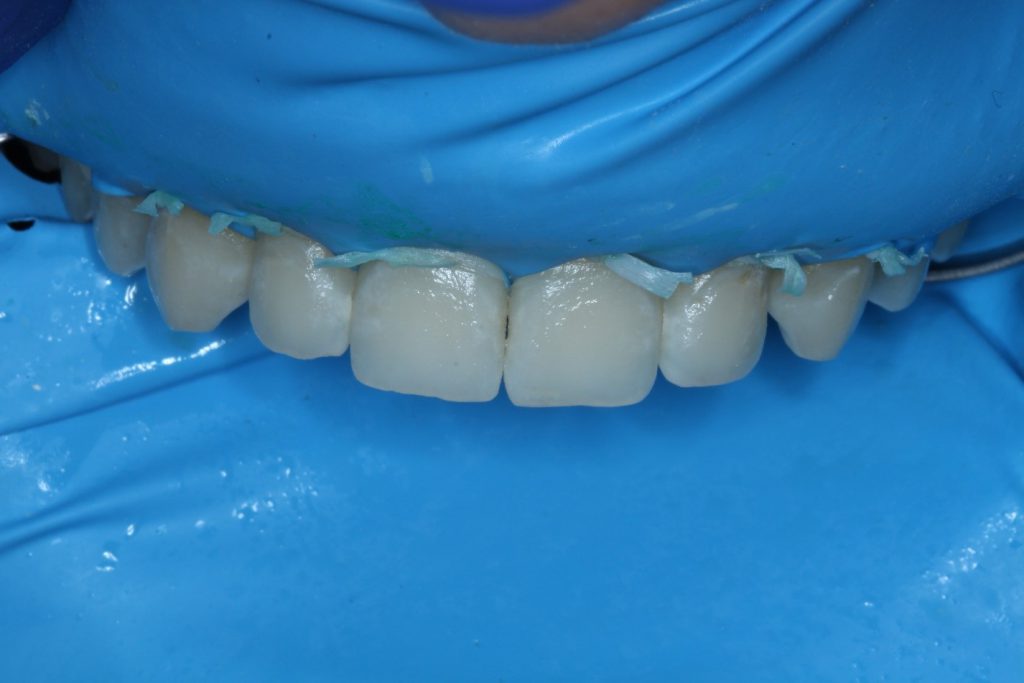 Dr. Nizami is a second-year resident in the biomaterials residency program at the UAB School of Dentistry. She can be reached at bnizami@uab.edu.

Disclosures: Dr Lawson has received research grants and speaking honoraria from DMG in the past.  The authors were not compensated financially for this article.

The Ultimate Look: ‘It’s Not One Thing, It’s Everything’

Tif’s top tips for dentists starting out with clear aligners

BACD supports the next generation of dentists

Overcome Burnout in Dentistry by Adding It To...

What To Do When You Meet One At...