Orthodontics for the Restorative Dentist

Kyle, a male in his mid 40’s presented to our GP office. He was missing some posterior teeth bilaterally and had an anterior crossbite, compounding a posterior open bite on the right side. Given that Kyle was only biting with his front teeth, he was finding it difficult to chew and was looking for an esthetic improvement. 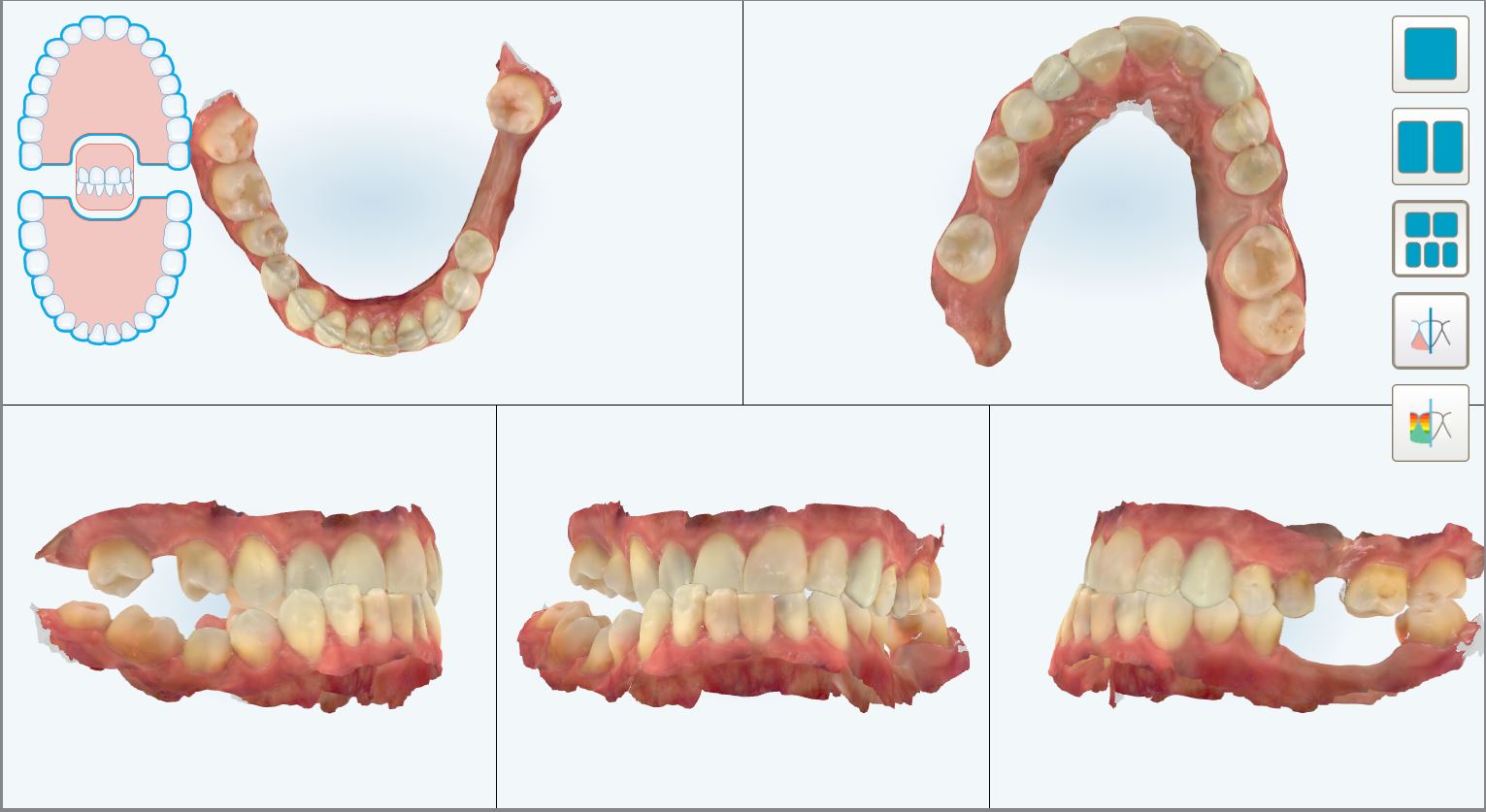 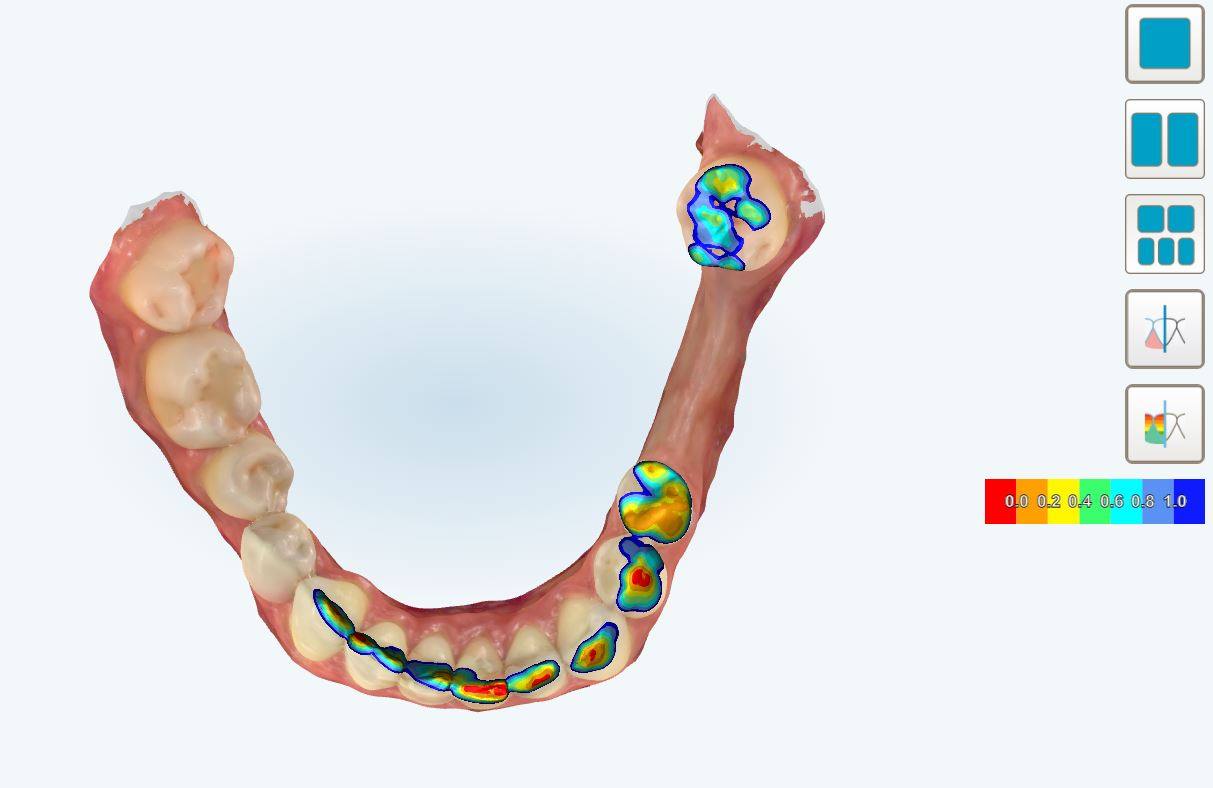 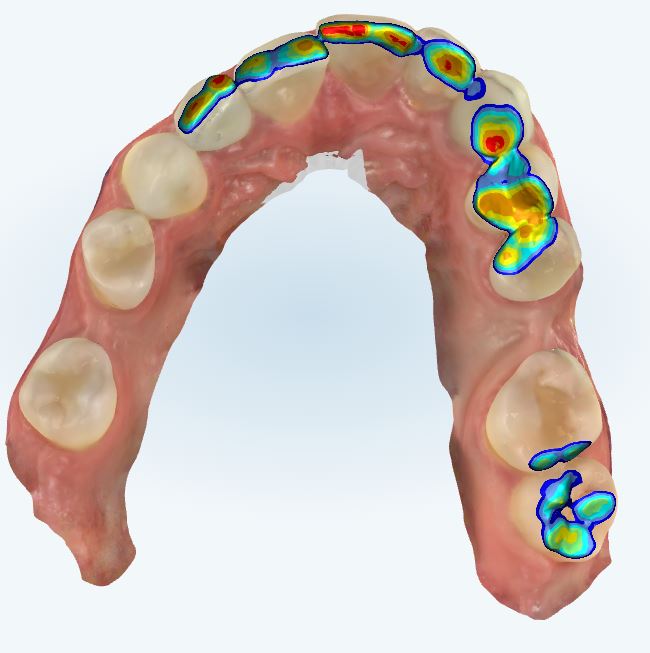 Prior to meeting with me, Kyle met with Dr. Zachary Mursic, a prosthodontist colleague of mine who felt the posterior occlusion could be addressed with a crown and bridge. The challenge would be restoring the anterior teeth while in crossbite without significant tooth reduction and endodontic treatment.

Dr. Mursic reported that when he first met the patient, Kyle mentioned that he had visited other dentists and specialists and was told the only solution for treating his case was jaw surgery, followed by extensive restorations. This was something he had wrestled with for years as he had been given only one option of surgical intervention. No one offered him any alternative to correcting his occlusion. This was enough motivation for both Dr. Mursic and myself to find a better solution.

Per standard practice, Dr. Mursic’s office scanned the patient with and we conducted a diagnostic evaluation over Zoom. Upon review of the scan, we quickly realized that jaw surgery would have had very little benefit for this patient as it failed to address the multiple edentulous sites and the significant prosthetic reconstruction that would be required even after jaw surgery. By properly establishing the VDO (vertical dimension of occlusion) and designing FPDs (fixed bridges) to both replace the missing dentition and re-establish a proper posterior occlusal plane we were able to digitally reconstruct his mouth before even starting the orthodontics. The only issue remaining was the anterior crossbite.

Our hope was that the anterior crossbite could be corrected with Invisalign clear aligner therapy in a reasonable amount of time, allowing the prosthodontics to proceed as planned. Using the ClinCheck® digital orthodontic treatment planning software it was determined that using anterior mandibular IPR allowed sufficient room for the mandibular incisors to be retracted. In addition, the maxillary upper right segment was pushed buccal creating a space distal to tooth #1.3. Although there were posterior teeth missing, the remaining teeth 1.6/1.4 provided enough anchorage to allow for the anterior buccal movement. All of this was achieved with approximately 20 trays and 6 months of pre-restorative orthodontic treatment. (Figures 2a-b) This was a much-preferred option for the patient compared to jaw surgery. 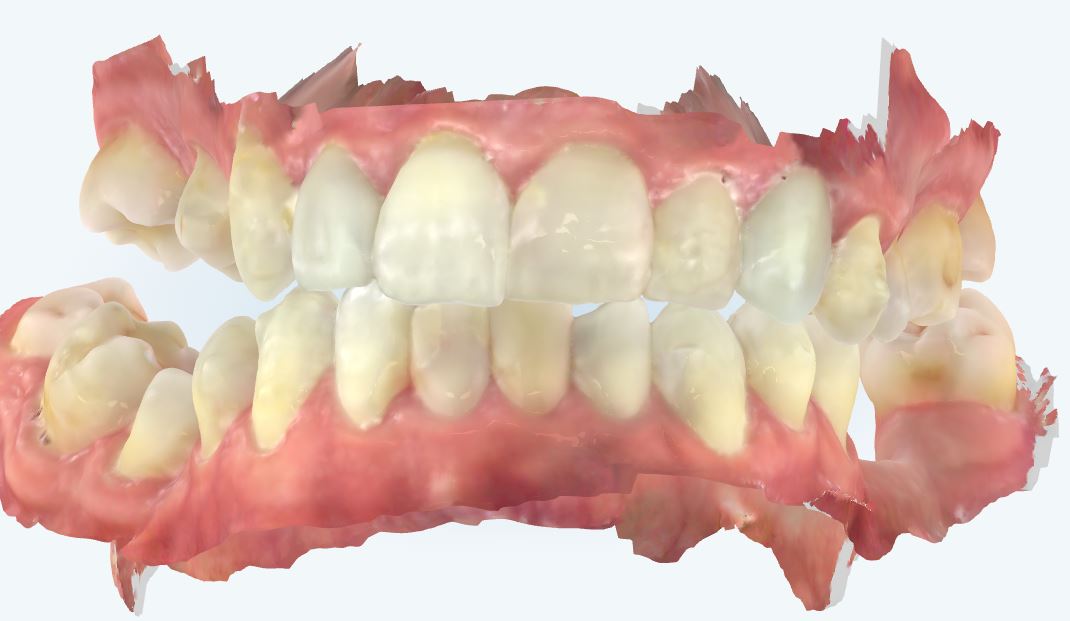 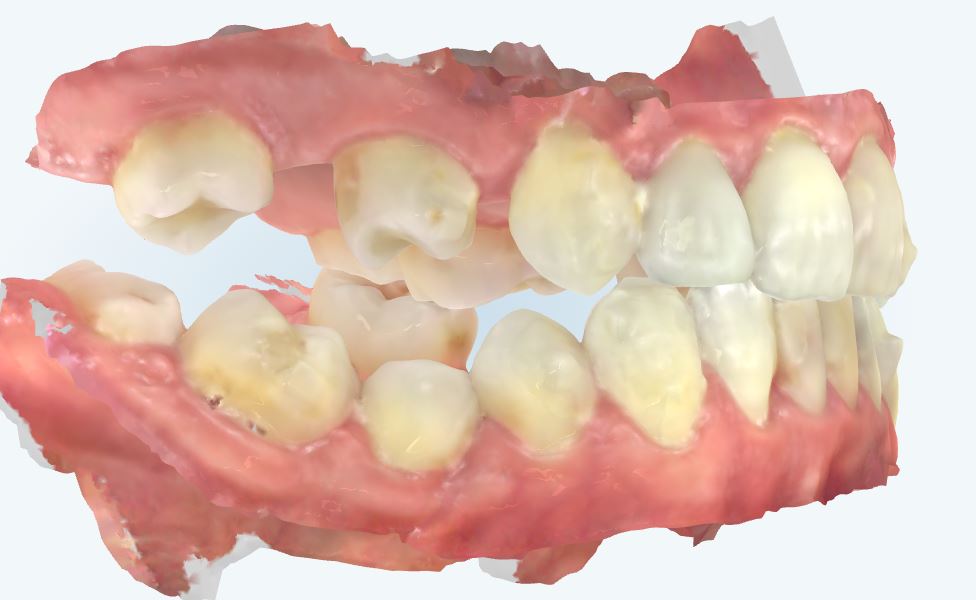 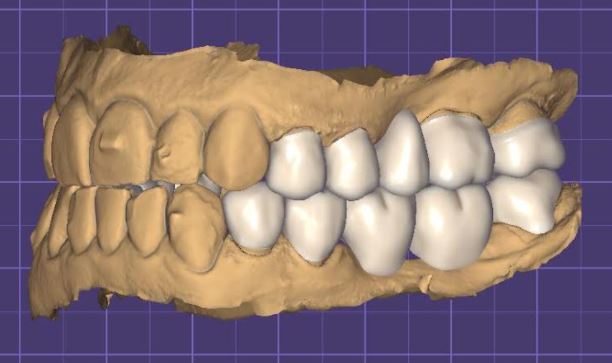 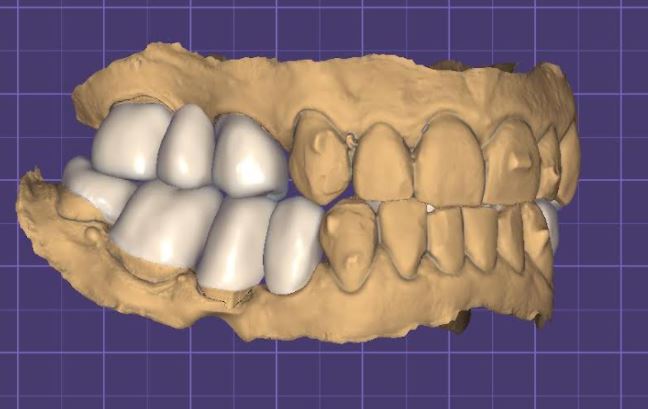 The final results are both fully functional and esthetically pleasing. (Figures 4a-d) 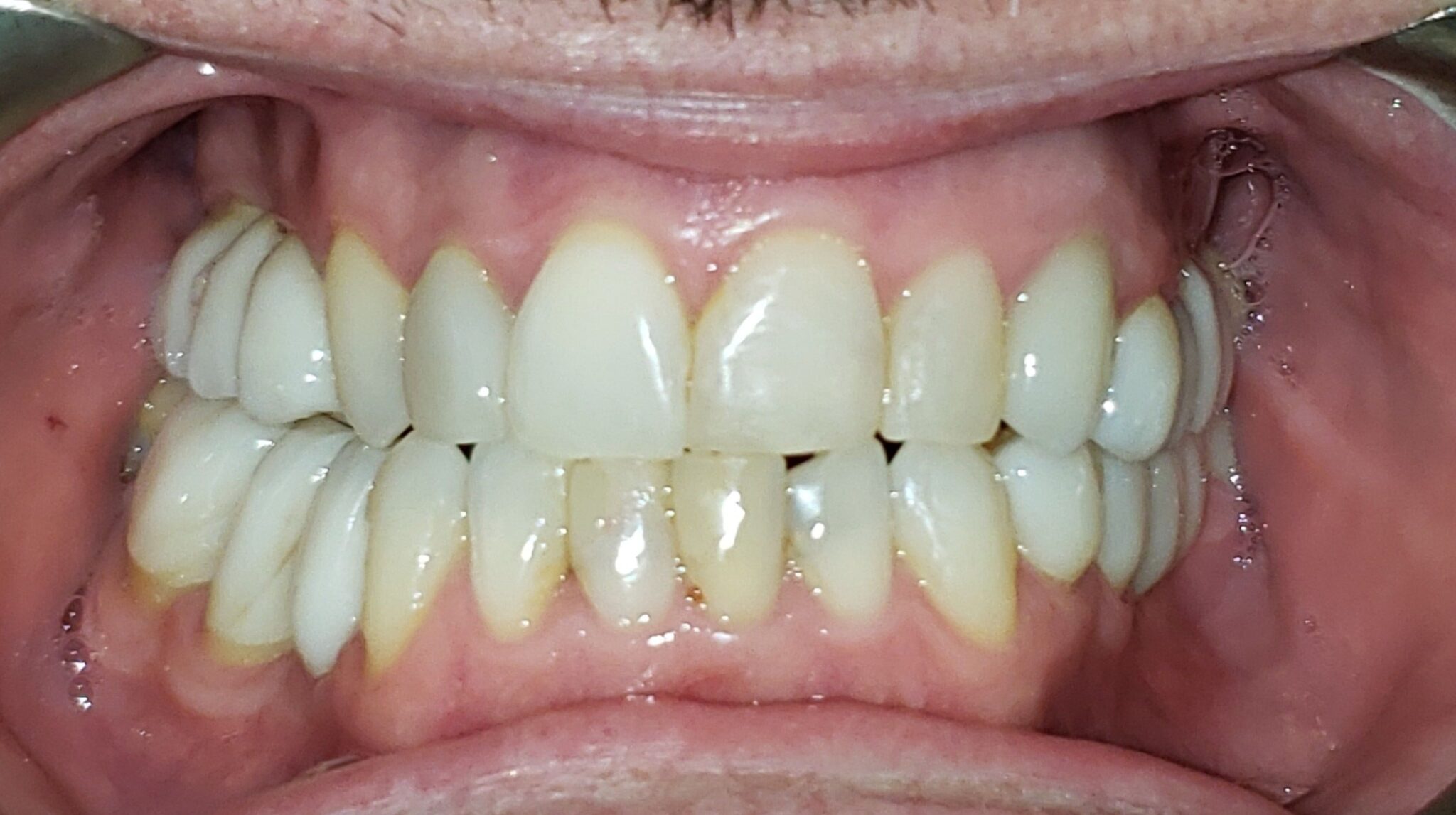 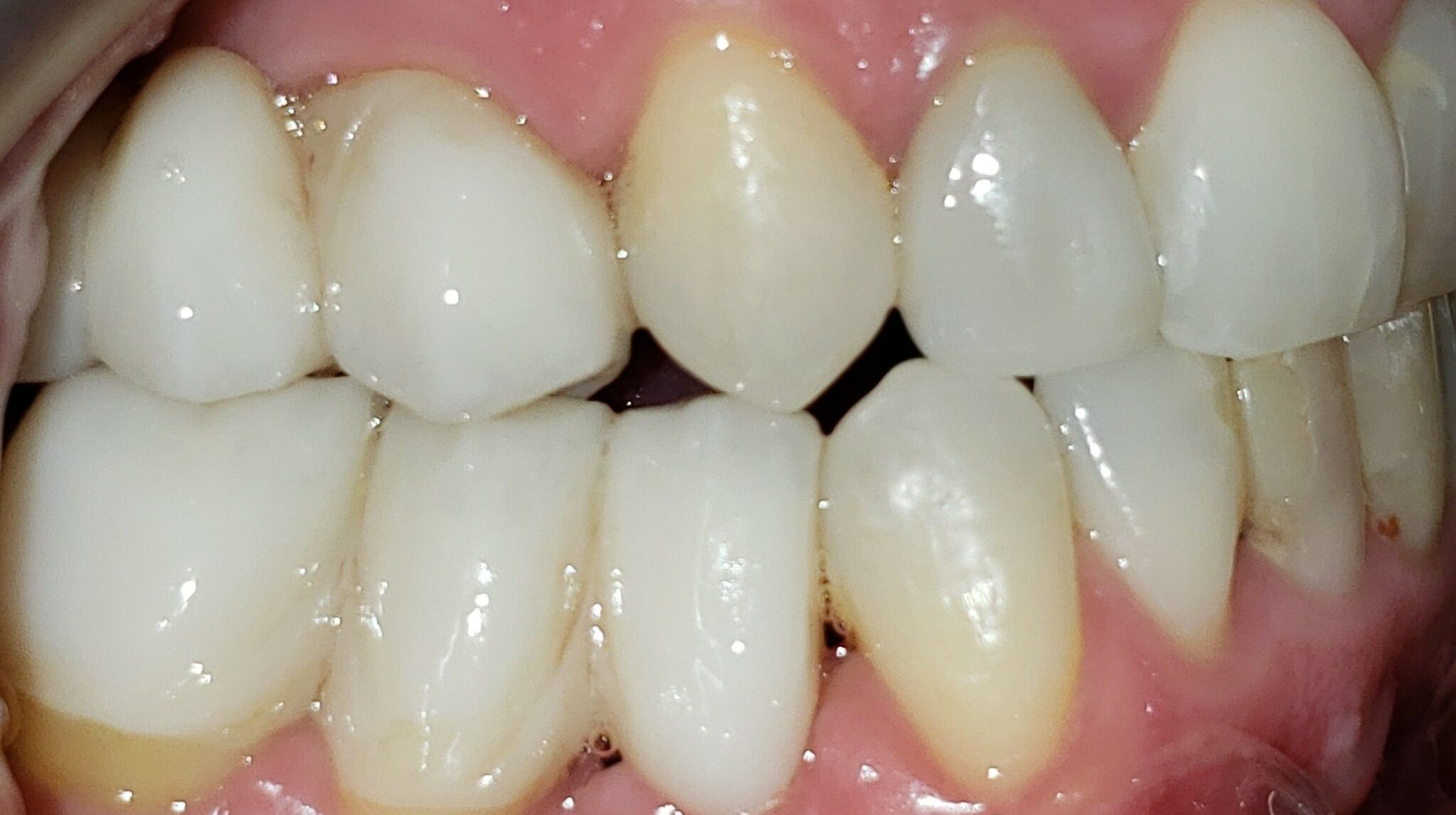 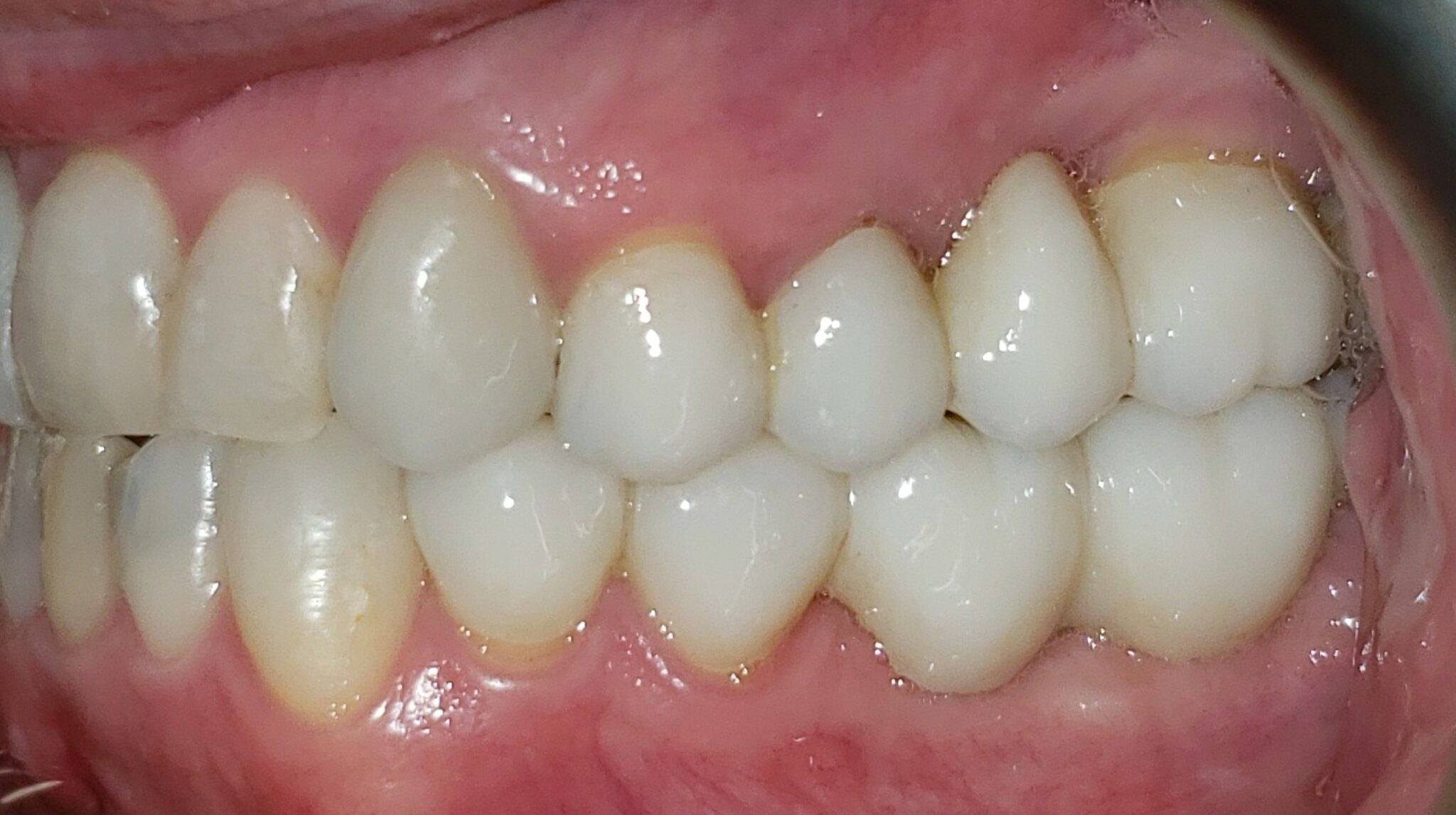 This combined orthodontic restorative solution was less invasive all around. Leveraging the Align Digital Platform including the iTero intraoral scanner and the ClinCheck treatment planning software allowed for an accurate Orthodontic evaluation and aided in the Prosthodontic treatment plan and visualisation. It also made treatment planning and communication easier between multiple providers, the patient, and the dental laboratory.

In summary, instead of erupting the posterior segments surgically, to bring them closer together, minimal reduction onlays were placed on the posterior teeth as well as FPD’s, and the anterior crossbite was addressed with Invisalign clear aligner therapy. In the end, the patient decided to forgo any anterior restorations for the time being. Digital dentistry contributed to an excellent result in a relatively short amount of time all the while being less invasive than other potential treatment alternatives. This truly exceeded the patient’s expectations. Digital dentistry has arrived and there is no going back!

Finding a Place for Universal Composites in Esthetic...

Bridging the gap between evolving evidence and supporting...

Seeing Is Believing: Maximizing the Use of an...

Reducing Noise in Dentistry: The Role of AI...

How to brush teeth properly! – Lumineux...