Home Orthodontics Mouhab Rizkallah – Our “Person of the Year” (2022)
Orthodontics

EDITOR’S NOTE: This article about Dr. Mouhab Rizkallah and his incredible accomplishment with QUESTION 2 is a very special guest post from William Tauro, owner and editor of Somerville/Medford News Weekly.

Why is Dr. Mouhab Rizkallah our person of the year? The Boston Globe article linked below explains Rizkallah’s remarkable 2022 accomplishments: Massachusetts is now “the birthplace of a dental revolution….Rizkallah’s crusade sparked a fire….often how a revolution starts…. one passionate person…..with a cause that can win the hearts of many.”

A Somerville Orthodontist, Dr. Mouhab Rizkallah is the actual author and chairman of Question 2 (regulation of dental insurance), which recently won a decisive 72% YES-vote victory (only 4 ballots achieved that percent-win in the past 30 years).

Massachusetts’ Question 2 is the first dental law in the nation to require dental insurance plans to pay a minimum percentage (83%) of insurance-premium revenue toward patient care (medical laws already require this minimum percentage for medical plans across the country). Question 2 is the first such dental law – it will reduce patient copays and increase dental care access.

Dr. Mouhab Rizkallah’s hand is victoriously raised with Massachusetts Dental Society President-Elect Dr. Abe Abdul in front of the Grand Staircase of the Massachusetts State House – moments after “Question 2” was signed into law by Secretary of State William Galvin.

Apparently Dr. Mouhab Rizkallah’s law (which personally cost him $2.8 Million) has changed the nation. The president of the American Dental Association (ADA) came to Massachusetts for election night, and said “What you’ve done….has set the stage for the rest of the country.”

Dr. Rizkallah will be awarded the ADA Presidential Citation.

In the YouTube video linked below entitled The Boston “Teeth” Party, multiple leaders in dentistry rally around Dr. Rizkallah and his winning Question 2 on election night. Rizkallah declares, “In adopting Question 2, Massachusetts voters have started a nation-wide revolution, dubbed The Boston ‘Teeth’ Party.”

Dr. Abe Abdul (president elect – Massachusetts Dental Society) follows Rizkallah’s victory speech starting with a long embrace between them. Abdul states “I am humbled you brought me onto your team.”

Dr. Abdul asks “Massachusetts, America, do you hear us?…..we are here today not to make a political point….we are here because 30% of low income elderly report they can’t chew food.”

He breaks down in tears, recomposes, and states “This is the beginning of change.”

Dr. Patricia Brown (past president – American Academy of Dental Sciences) followed Dr. Abdul stating, “I have been practicing for 50 years, and this is the biggest victory in my life…thank you Dr. Rizkallah for letting me be part of this.”

Rizkallah replies with “My honor.”

Dr. Andrew Chase (past president – Massachusetts Association of Orthodontists) then takes the stage, and states “It’s been said that it is not the size of the dog in the fight – but the size of the fight in the dog…the most powerful fight of any dentist I know is in Dr. Mo Rizkallah.”

Campaign finance reporting shows every state dental society in the nation supported Question 2, because it will affect patients in all states – a national “revolution.” 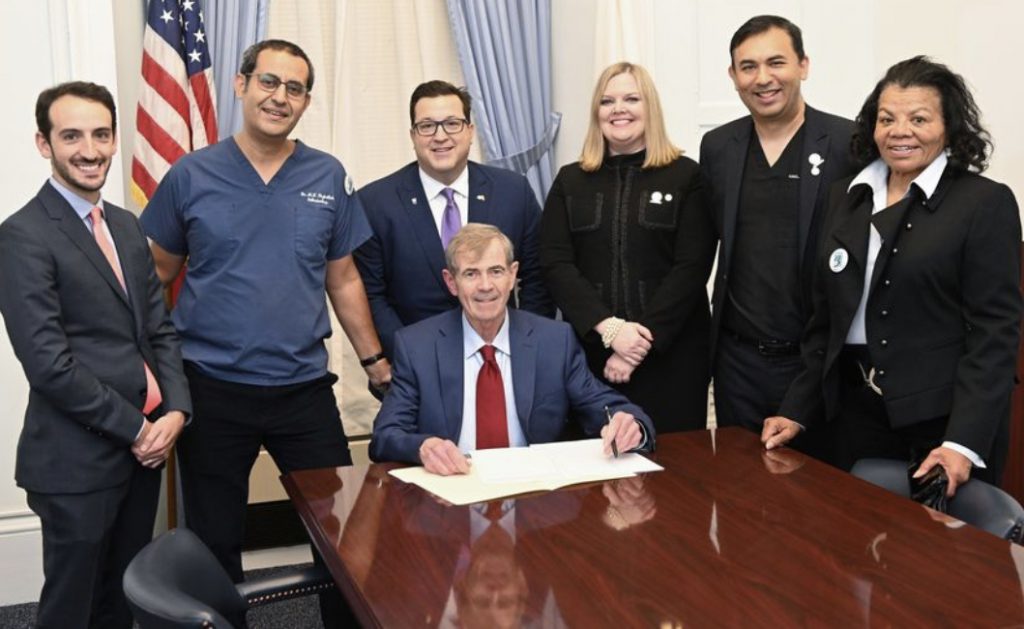 When asked why it is so “revolutionary,” Dr. Mouhab Rizkallah explained: “No state has this law for dental Insurance because the dental insurance lobby can powerfully block normal bills. But they are powerless against a ballot question, and this was the first dental ballot in the nation. I designed it to 1) set a minimum state spending percentage and 2)require annual financial data to expose their waste. That waste-reporting will convince the other 49 state legislatures to adopt a similar dental insurance regulation. The waste-reporting was specifically designed for national impact.”

When asked if insurance companies can afford the 83% rule, Dr. Rizkallah said “Yes, here are the facts” and he pointed to a political ad he used during the Question 2 campaign, which shows Delta Dental of Massachusetts contributed $291 million to their parent company the same year they only provided $177 million for patient care (Delta pays no taxes and files as a “not for profit” company).

This year, Dr. Rizkallah has outdone himself with a national platform, a nation of leaders behind him, and a national oral health impact affecting hundreds of millions of patients.

Dr. Mouhab Rizkallah and the leaders he shared his award with are our Person(s) of the year 2022.

‘Without my team and the Invisalign system,...